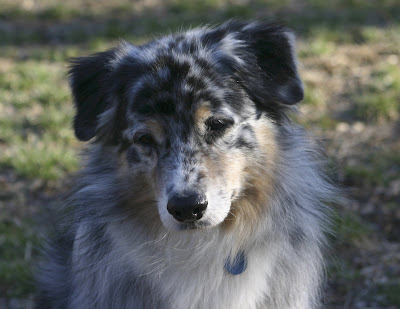 I lost my special Good Boy last week. My Bobby, my heart dog, my first Aussie, the dog from whom I learned the most about training, showing, and just Dogs, was killed early Saturday morning the 10th of November. He'd gone walking with his Poodle housemate Ziggy and my sister, and after an hour, as they were approaching the car at dusk, in the drizzle, he simply went walkabout into the woods never to be seen alive again (by us, at least). After calling to him for 2 hours she called me and I returned home from Easton to join in the search. Overnight I made 'lost' fliers and went back out to call again, but all along I worried that rte 32 would be the ending to this story. Early Saturday morning we met up to resume the search and to distribute 'lost dog' flyers. Within 10 minutes of my sister's having posted a notice in the area I got a cell phone call from someone asking if I was the person looking for a dog. To keep it brief, she was calling from literally across the road from where I was putting fliers in mailboxes, to say she'd found him roadside. He was right there, dead. He'd been hit, probably within the past couple of hours judging from his condition. I got another call later in the day from someone asking if I'd found him (they saw a flier we'd not retrieved from a power pole, I suppose) and she told me she'd had him in her house for 6 hours...he'd been at their kitchen door barking at 10pm so they let him in and fed him (happy dog now!) and went to sleep in the kitchen (extra-happy dog). But at 4am he barked to go out, and these kind people let him out to pee, thinking they could just call to him and he would come right back in but of course he trit-trotted right up the driveway and out of sight. He was killed on rte 32 right at their driveway, probably within an hour of leaving their house, just being Bobby. And if I had put an ID collar on him before I went away that week like I used to do, he'd be home with me right now because the Powders would have called me, hopefully right away when he first arrived there. But I didn't, so we all failed him.
He was 11.5 years old.
Posted by Inkwell at 3:13 PM 5 comments: 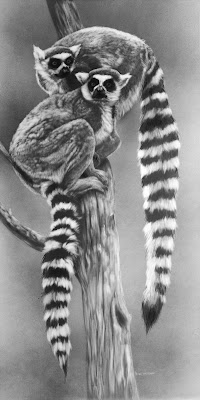 My first Scratchboard in a while, wanted to do this pair. They are ring tailed lemurs and they will be with me at the Waterfowl Festival (Elks Gallery) next weekend. Hope to see you there!
Posted by Inkwell at 5:46 PM No comments: