I haven't done this in a while (haven't done anything with the blog for  awhile!) but now I am going to try to make up for that a bit with this Work in Progress demo. I am painting a 36"x24" canvas from start to almost-finished in this post; I hope to post the completed painting stages, including some detail shots, within the next couple of days. Have to do the work first, I suppose.

So: using one of my favorite subjects, a Great Blue Heron.

First I select my reference photo or photos, which I don't need to show here.

Canvas selected, I tone it with a wash of burnt sienna thinned with Turpenoid. 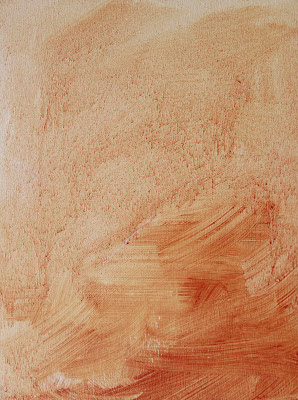 This canvas will have to dry for a day before I can paint on it or I'll contaminate everything I paint on it in first layers, with burnt sienna.

I sometimes have a canvas-toning session where I tone a large number of panels and canvases at once since I almost always use a burnt sienna base.


Next up is the initial oil sketch, also in thinned burnt sienna. In an organized artist's studio this could be the first paint that goes on the canvas, foregoing the wash which is redundant. But that would require thinking about it. 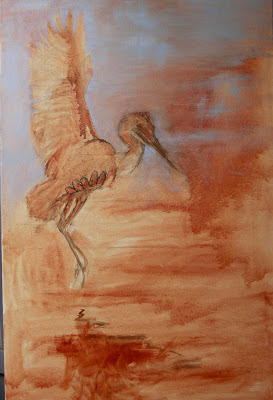 You see a bit of light blue background early on, when I was considering my setting. The heron was to be setting down onto silvery blue water that was reflecting only the sky and the bird itself, but it wasn't completely thought out yet. (Always a mistake but there you are). More on that later.

This is the stage where I set the drawing of the bird, get the proportions and positioning right,  the feathers where they belong. After this it is coloring in the lines. Well, sort of.

(Click on the photo to enlarge it; remember you can do that with any photo on this blog).


OK now I will paint a heron. One of those Rules Of Painting does hold true here: start with the darks and then proceed with the lighter colors. Another of those Rules of Painting that is pretty much an essential in oil painting is 'fat over lean', so the underpainting of washy, thin paint gets built upon with subsequent layers that have more paint, more pigment. To make a successful painting you have to get the paint on there, build and layer it. 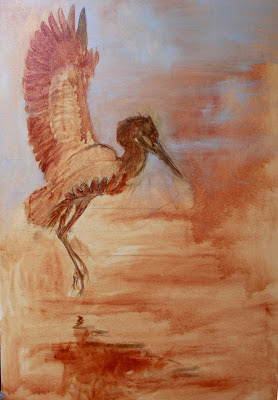 I am still monochromatic aside from my premature water dabbling. Delineating the feathers, refining the 'drawing'. If one is painting representational art (you know, painting things as most people actually see them) one does want to be reasonably accurate about it. So if you are painting individual feathers, even loosely and with a big broad stroke to represent those feathers, you might has well get the right number there. Know your subject so you understand what you are seeing. Paint what you see (as opposed to what you think you should see) but understand what is there. So in painting a wing you want to know which direction the feathers layer (which ones are under the next one, which overlap the next one). There is a common basic pattern in wing feathers of all species due to the physics of making a wing of feathers lift a bird on air resistance (AKA flight).


Now at last I start mixing paint and putting it on the canvas. Darkest first, those darkest primary and secondary wing flight feathers, and the head marking, the shadowy parts of the body . 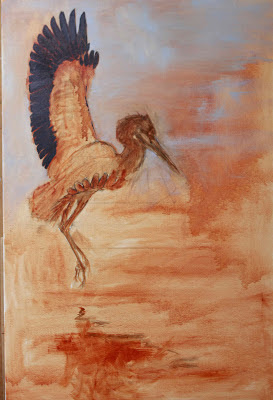 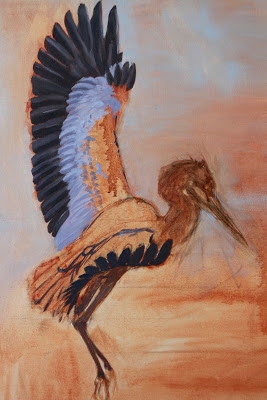 The legs are starting to get some paint as well might be a bit of white in that basic black mix I describe, but still not much color in the painting yet. It will come.

Here I have started to work on individual feathers, usually having a couple of brushes and going back and forth with the lighter and darker sides of each one.  I constantly remind myself to check the overall drawing still, to be sure I am not sitorting the feather lines. The concept of losing the forest for the trees is very real when painting and failing to watch how paint lines start to change shape.
Also a bit of shadow line on the tail and back feathers.

Now I start getting more paint on. The photos seem   blue but those lighter body feathers are a bit violet-blue-gray with the addition of some alizuran crimson. 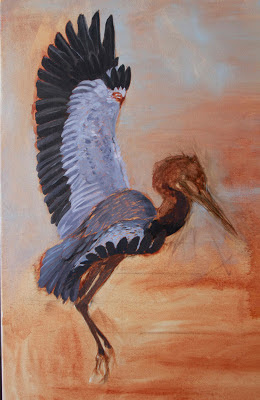 Starting dark on the back, I'd done some of the shadows on the tail feathers (another spot where you might as well layer them properly ). Then start layering on the lighter feather areas. Here the photos shows a bit more of this slight violet coloring of the feathers. Herons can look almost purple, to a clear blue, depending upon the light. They are actually a violet-blue-gray. (With a lot of other colors on the neck).  This bird's neck would normally be a warm medium gray with some chestnut-y areas fading in, but the lighting in the painting casts the neck in shadow for the most part, so it is dark brownish-gray here. Yes I am going back and forth a bit of dark and light; but the overall trend will be to bring up the light.
On the back of the bird the paint layer is not solid. There is a reason for the original  underpainting to be warm and solid: some bits here and there will show through the finished painting and while it won't be obvious like at this stage, it will register in the brain, giving the painting a warmth. Also leaving areas on the back unpainted for now allows for putting the details of feather shadows without painting wet-on-wet when I don't want to.


Now we are seeing a bit more bird. 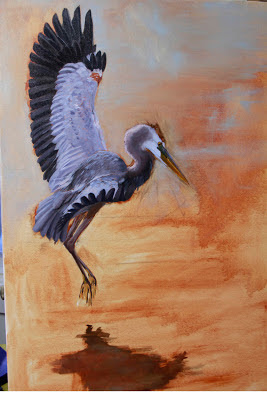 Now I am getting more white paint in, starting to highlight some feathers, working to cover the back with the streamer feathers, and to be sure the bigger feathers have a nice shape and shadow to delineate them. Started working on the head detail a bit with the whitish paint around the bill and eye, the green cere (skin between eye and bill) and the bill with its oranges, yellows, slaty blues etc. The light source is behind the bird so the bill with show some translucence, giving an opportunity to pop some real strong color there. Not yet, but being developed. I am blending here on the head and neck feathers, using a  soft brush to blend. 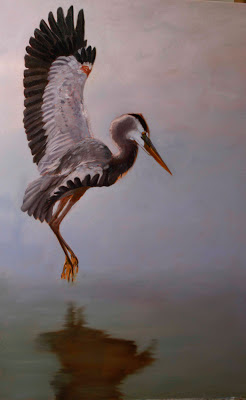 I did a lot of panting betwee the last photo and this one. I really developed more detail on the bird of course, further delineated wing feathers, and then it was time for the surface of the water. The pale blue reflected sky I had hinted at with the first bit of paint early on has made way to a gradated light pinky-silvery-to-greenish-foreground water surface.

I have painted many a bird on a silvery water surface but there was something I couldn't put my finger on with this one that made me not like it. Ah the beauty of oil painting, I can always change it! And I will. And actually I have, but no photo yet.

Some thoughts about the big change in the painting: I did know I didn't want any habitat aside from water, right from the beginning. Grasses would needlessly complicate the view and would take away from what I wanted to do. But one of the things I hope will be most appealing about this painting will be the light, with the bird back-lit and the sparkly highlights (yet to be painted) on the bird. Part of the problem with this reflected sky is that a lot of that nice backlighting won't really stand out against the silvery sky reflection.

So stay tuned, tomorrow or the next day another photo will show my resolution of the problem.  Better planning on my part would have resulted in a painting that would probbaly be completed by now, but hopefully I can work to make it a successful finish despite my muddling about.

As I mentioned above, I needed to resolve a problem I had with the painting. 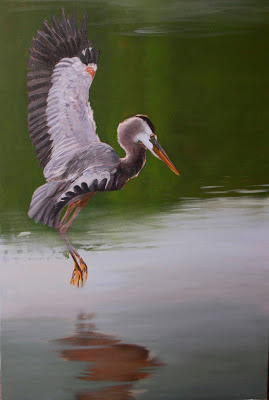 Nothing like a little green paint.
A common rule in composition tells us not to make the horizon line dead center, or to palce a subject dead center, or to divide the image in half as I have done here with my green reflection. But the weighting of the painting by dominating the upper left quadrant with the subject, and the crossing of the order by the bird's legs and the reflection, change the balance to a more natural and asymmetrical composition.

This s the initial painted reflection; much work to be done to clarify rippled edge of the tree refection. 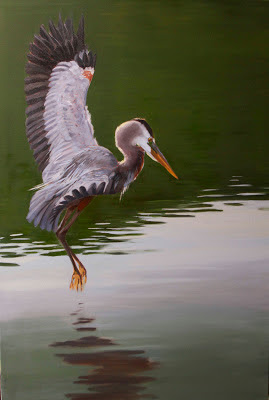 Defining the ripples now, worked a bit on legs that had been overpainted when the water was being painted. Also more work on the streamer feathers on the bird's back. 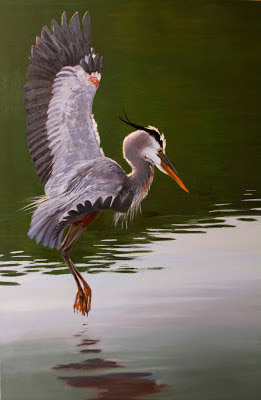 Now working on highlights on the feathers to show the backlighting. This is almost complete now; after a day away from this painting I'll clean up the reflected sky and trees, and sign the painting. There will be a spray coated 'retouch' varnish that levels out shine and matte areas on the painting, and helps protect it (along with speeding drying). 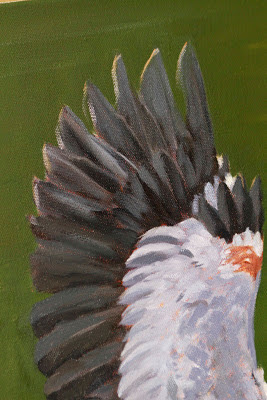 A bit of detail of the wingtip-since the underside of the wingtips are probably hit by the low sun lighting up the other parts of the bird it makes sense to try to show it. (My reference photo is from a cloudy day so I am working from having seen it in other cases). 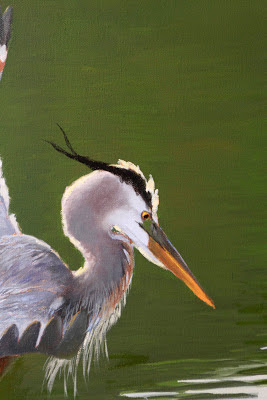 Sun lighting up those cresty white head feathers, and shining through the translucent bill. These highlights are, in the end, the reason I paint a specific scene.


I meant to list my color palette above, but will do it here instead.
(These are all Winsor Newton Artist Oils).
Titanium white
French Ultramarine blue
cadmium yellow
cadmium red
burnt sienna


That's it. That's it for the majority of my paintings. Rarely,  I  do have the need for a more electric blue than I can  achieve with UM blue, so a pthalo blue or winsor blue will come in handy, but that is not a good blue for mixing many other colors.
For a straw or grass yellow I cannot find with my limited palette, Naples Yellow is irreplaceable.
Paynes Gray is used by some artists to knock back the strength of some colors but I use it for one purpose only, which is to paint blue merle color in a dog or dapple gray in a horse. In both cases a small amount f burnt sienna to warm the gray (and of course white to lighten it) are used to get the right color, shade and tone.