But not because I haven't been working. The past 3 months were spent painting art for the 2 specialty dog shows I planned for this year. Preparation included making the artworks, preparing prints, framing prints, and doing the trophy framing for the Australian Shepherd national specialty. Also had new paintings and prints for the Shetland Sheepdog National Specialty. I was in Perry Georgia for the Shelties first, where I met old acquaintances and new ones, all with a common interest in this pretty and versatile breed. 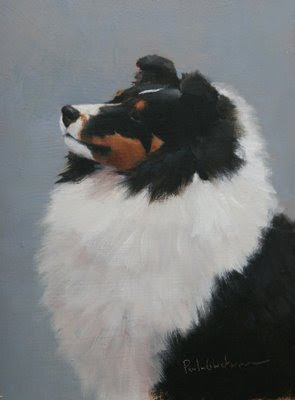 
My dog Encore went into the ring as did a number of his close relations, and as always it was a spectacle of great animals. Then I had a week to burn before heading for St. Louis area to do the Aussie Nationals. I spent that week at Meramec State Park in Missouri where I camped with my Sheltie and a friend's nice young Aussie in my little travel trailer. The plan was to set up camp in this park and to work on a couple of paintings I wanted to complete for marine art exhibitions which had entry deadlines during my trip.

Great plan except that it rained Every.Single.Day. All.Day. while I was at Meramec. So I was finally painting inside my small trailer with 2 bored young dogs. Not the ideal situation. But what can you do, right? I had no way to know it would be that unpleasant and I did not really want to drive all the way home before then heading west to St. Louis, so there I stayed. I never did make deadline for the juries of those shows but have a couple of paintings almost finished which will go to galleries instead. I did do this little goose while holed up. 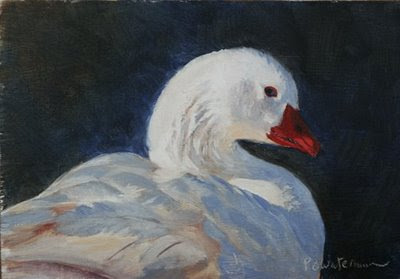 'White Goose' 5"x7"
When the day came to move camp on up the road at Purina Farms for the Aussie Nationals it was sunny and nice (of course). Well, the best way to fold up my little hybrid trailer is in dry weather at least. I packed up and moved on Sunday and waited until they were able to allow the RV's to get their spots. 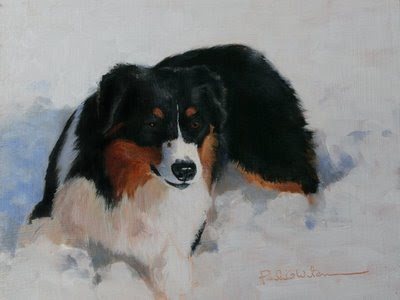 'Deep Snow' 8"x10"
The following day I set up a somewhat abbreviated booth space under the main show tent and gave Blossom, my friend's Aussie girl, a bath in prep for her show debut on Tuesday.
Also started the process of pulling out the framed prints that were prepared for the trophies and judges' gifts during the show.

Blossom's debut in the ring was not an auspicious one though she did fail to trip me in the ring. Her second time in the ring on Thursday we were much better as a team though no ribbons resulted. But she is simply very green and needs to learn, well, stuff. And she will, back home with her owner.
The sculpture of the Aussie that we have had up for raffle in benefit of the Australian Shepherd Foundation was on display all week and final raffle ticket sales topped $9000 for the Foundation. I was honored to be the one to draw the winning ticket at the Thursday night banquet and, as very interesting luck would have it, the winning ticket was held by the niece of Nadine Grady, a board member who had the assignment to judge Best of Breed the next day! Nadine's niece said a few words about her aunt Nadine's influence upon her and her fun dog show field trips with her when a child, and then announced she was giving the sculpture to Nadine. 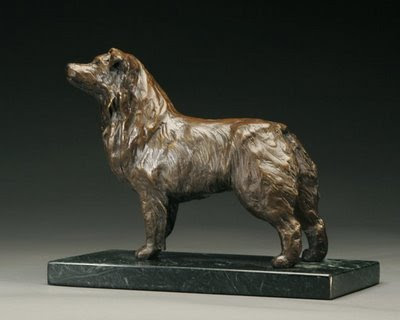 It was all very fitting, and I shipped the piece to Nadine this week. The art auction at the banquet was also quite successful and the original painting used as the official artwork for the specialty fetched a nice price at auction. (I always donate the art for this). 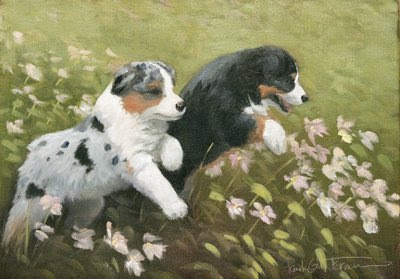 After 3 weeks I was quite happy to return home and I packed up the art booth that Thursday (the day before actual end of show) as the forecast was rain for Friday. Sure enough Friday started with heavy thounderstorms (Tornado Alley duirng Tornado Season, in a trailer!) and they continued, and continued, aand continued some more. I finally ended up folding up my trailer wet as I'd have had to wait til noon or later for rain to end. The storms caused hours of delays in judging Best of Breed (a few hundred entries plus junior showmanship that day) and I was on the way home before judging was partway through. But I was ready to go and mission , for me at least, had been accomplished with the wrap up of the year-long sculpture fundraiser plus the delivery of all the trophy prints.

I will plan to attend Poodle Nationals next year after having had to sit them out for thew past several (since they are now in April in conflict with shelties an Aussies). Unfortunate bad luck on the timing; these are the only dog shows I even do (as an artist) as a matter of fact. But time to give Aussies a break (though I will continue the logo art) and Shelties will be in Tucson next year. All at the same time as Poodles, and I want to get back to my big canine topiary show again, I really enjoy it and I adore the breed. 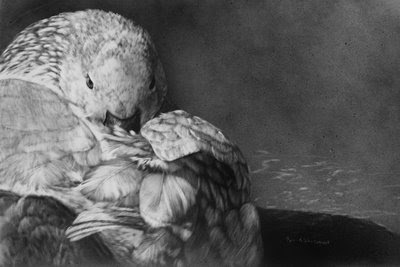 "Not Sleeping' 10"x15 "scratchboard for Birds in Art at the Leigh Yawkey Woodson Art Museum in Wausau WI.